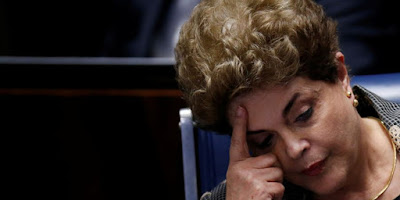 On August 31, a rainy afternoon in São Paulo, I watched the 2016 coup play out on the Senate TV channel. They referred to the process as a legal impeachment. They claimed that Brazil’s president, Dilma Rousseff, had committed a macroeconomic crime.

My dear reader, stop pretending to be impartial. Stop trying to convince yourself that this decision will overthrow the Workers’ Party (PT). It’s will not.

Those who stood behind this coup have, by default, supported Michel Temer, Eduardo Cunha, Aécio Neves and their followers.

Those who were in favor of this coup have endorsed corruption.

I am not a member of the PT. I will never become a member of any party, due to my work as a journalist, as well as for personal reasons.

But I am not afraid of taking a stand: I think it’s important to say that this impeachment was actually a coup. I believe it was a parliamentary coup brought about by corrupt politicians.

I watched Dilma Rousseff’s trial since it started on Thursday, August 25, paying attention to the arguments of the prosecution and the defense. There was no consensus over the fiscal maneuvers, which are central to the impeachment claim.

The Senate voted favorably for her impeachment, with a score of 61 to 20. Senator Randolfe Rodrigues was responsible for proposing a separate motion concerning Dilma’s political rights. However, the 43 votes in favor of barring her from holding any public office for the next eight years were insufficient.

In a nutshell: The coup removed her from office, but some senators, mainly from PMDB (the current president’s party), realized that an open war against the PT was not a smart idea. They decided that they didn’t want to bar Rousseff from public office for eight years, unlike what happened during the legitimate impeachment process against Fernando Collor de Mello.

Here are the facts about the politicians that voted in this process.

Renan Calheiros is a defendant in at least 11 investigations into corruption crimes.

Another member of his party, Romero Jucá, was involved in plotting to stop investigations into the Car Wash Operation.

I think it’s important to say that this impeachment was actually a coup.
Antonio Anastasia, who was responsible for preparing the impeachment report, has been accused of receiving R$ 2 million from the Andrade Gutierrez, UTC, OAS, Odebrecht and Queiroz Galvão contractors as well as from the BTG Pactual Bank, which were all mentioned in the Car Wash Operation.

Aécio Neves was mentioned at least five times in the plea bargain process of the Petrobras corruption scheme.

Michel Temer, the new president of Brazil, has been accused by the Car Wash Operation investigators of receiving R$ 5 million from congressman Eduardo Cunha since 2015. The former speaker of the lower house of Congress, whose political rights have not been suspended, has allegedly received R$ 52 million in 36 installments, according to an accusation in one of the numerous plea bargain statements.

It may sound repetitive, but one thing is clear: All these crimes are more relevant than the fiscal maneuvers carried out by Dilma Rousseff during the Harvest Plan.

All these investigations involve money stolen from the Brazilian people, and not financial operations devised to obtain financial resources for the “Bolsa Família” and other social programs.

All the facts of this coup must be reiterated, no matter how repetitive they may sound.

Senators from PSDB (and their political allies) consider the fact that Dilma has kept her political rights as a “coup” against the impeachment process.

The hard and cruel truth is that the Workers’ Party corrupt congressional base disrespected the constitution and double-crossed a president elected by 54 million votes.

And they did it in order to keep stealing from all of us.

This post first appeared on HuffPost Brazil. It has been translated into English and edited for clarity.


Drop by drop: Living through the São Paulo water crisis 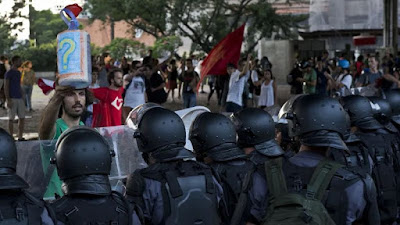 Every morning, by 9am, I am out of water for the rest of the day.

I've changed my breakfast routine. These days, I eat water-free food like bread with butter or milk with chocolate. Unfortunately, I can’t take a good shower, so I wait all day until the water turns on and quickly scrub as hard as I can for five minutes. The act of bathing is a luxury. Why can't I have water, you may ask? Brazil is in the grip of the worst drought in 40 years.

I don’t have any water supply from 9am to 3pm. I don´t have access to this vital resource between five and six hours each day. I can't cook, to clean my house or even drink from the tap. I have some water stored to use the toilet, but I can’t flush it without draining this reserve. Over the last few months, the price of bottled water shot up from from 2,50 reais (88 cents) to 3,50 ($1.08).

According to Sabesp, the Brazilian water company, residents of São Paulo — more than 10 million people — should expect five days a week of restrictions and only two days of full service. There was no date given for our access to be restored. If the situation gets worse, people from São Paulo will need to move to other parts of the nation with adequate water. I don’t have a wife or kids yet, but this is difficult for everyone.

We are all worried we will become refugees.

Since October of 2014, I’ve suffered from water rationing. I know friends and other colleagues who’ve had these problems since September 2014. This shortage was not an accident, nor an act of God: this is a result of twenty years of government neglecting the ecological management of the water supply. Instead of investing in infrastructure and rain water collection, Sabesp waits for a crisis to occur before taking action.  “We will not lose our water," said the governor Geraldo Alckmin in 2014´s reelection campaign.

And yet, here we are.

In São Paulo, Sabesp controls the water reserves and all the dams. The dry weather is affecting our agrobusiness, the main way Brazil makes money - and the press estimates we may have lost more than one billion reais from our economy since the drought began.  And the pressure is mounting: now industries and the residents in São Paulo are demanding answers. But governor Geraldo Alckmin is not taking responsibility for the drought. President Dilma Rousseff is not helping in all this crisis.

Alckmin didn’t act like a leader with a plan- there was no transparency in his actions and he failed to prepare Sabesp for the effects of  global warming. Now we are all suffering.

To end the water rations, the way water is taken from dams to cities needs to be reconstructed, reorganized and redistributed. In the northeast, citizens learned to cope with the droughts by capturing rainwater in domestic cisterns - why can't we do the same? What is stopping us from being proactive with this problem?

Closer examination reveals the problem is less about the drought and more about the billionaire corruption inside Sabesp. Instead of investing in infrastructure to prevent the drought, they cut investment to hoard money. The national police and the authorities need to investigate seriously the Sabesp management and the responsibility of Alckmin in the current situation of São Paulo.

Our waterless future in some regions of São Paulo is impacting the Brazilian economy and the GDP.

And it could be worse - if the water crisis continues, entire country is in peril.

I would suggest we protest, but most of us cannot march and shout - our throats are too dry, and we are too thirsty.

Journalist, writer, communicator. I'm the editor of the website Geração Gamer, about videogames in Brazil, and freelancer reporter of Diário do Centro do Mundo, DCM.
Postagem mais recente Página inicial